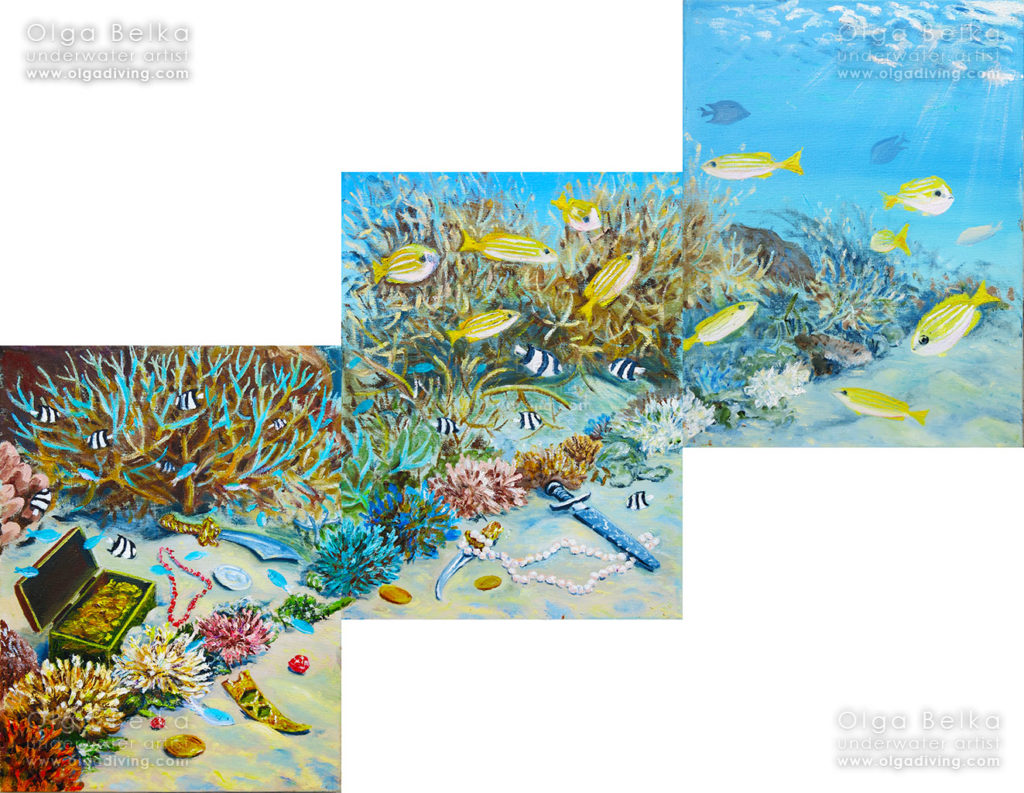 The sea gold triptych is dedicated not only to sunken treasures but also to the golden sun glare on the sand, the shiny backs of yellow snappers, and unusual shades of corals. Behind the scenes, all the treasures are plastic toys. Before the next Plein air trip I bought up the entire assortment of the online store, all the things somehow similar to the treasures. Almost everything came in handy.

There is a chest with coins, a knife, a blade, a dagger, beads, and “precious” stones. Part of these props also successfully fit into paintings “Stealing treasures”“Stealing treasures” and “Treasurers on duty”“Treasurers on duty”. The plastic had to be weighted down with all sorts of metal debris found in the dive center: nuts, bolts, and others. A self-tapping screw is installed into each plastic coin from the bottom.

“Sea gold” is one of my favorite paintings, but it was physically difficult to work on it during seven dives. All three canvases were connected. So, to swim with them, overcoming the resistance of the water, turned to be rather hard. On top of all that, each time I had to carry a separate bag with props, to arrange them, and to collect back in two hours.

Any artist knows that one should work on a painting evenly, paying attention to several areas at once, seeing the entire composition, and comparing colors. Therefore, the props had to be carefully laid out almost every time even if I wanted to work on the corals more. For several dives in a row, an octopus has been watching me from under a stone. It was large and dark. It almost did not change colors, preferring the mourning scale. The octopus categorically did not want to pose.

During the last dive, when I had finished the work on the painting, the octopus came to me. Still, I couldn’t stop myself and continued painting. The octopus, passing by casually, practically pushed me with its “shoulder”. It glanced at the painting and moved to the treasure, sat on the largest dagger, and tried to take it out of its sheath. Then it broke the dagger in half, moved to the next one, threw it in my direction, closed the chest, and left. My assistant and I were taken aback so much that we stayed motionless and just continued watching. Perhaps, being attracted by the glint of my plastic gold, the octopus just decided to taste it and tried to break it like a shell. However, I like the other version better: octopuses are the smartest marine invertebrates. Do You know that they are even smarter than dogs?

Anyway, I decided that it highly appreciated my work. It made it clear that the best is the enemy of the good, and it’s time to finish. The next day I was going to leave. It was the final dive, and we never met again.