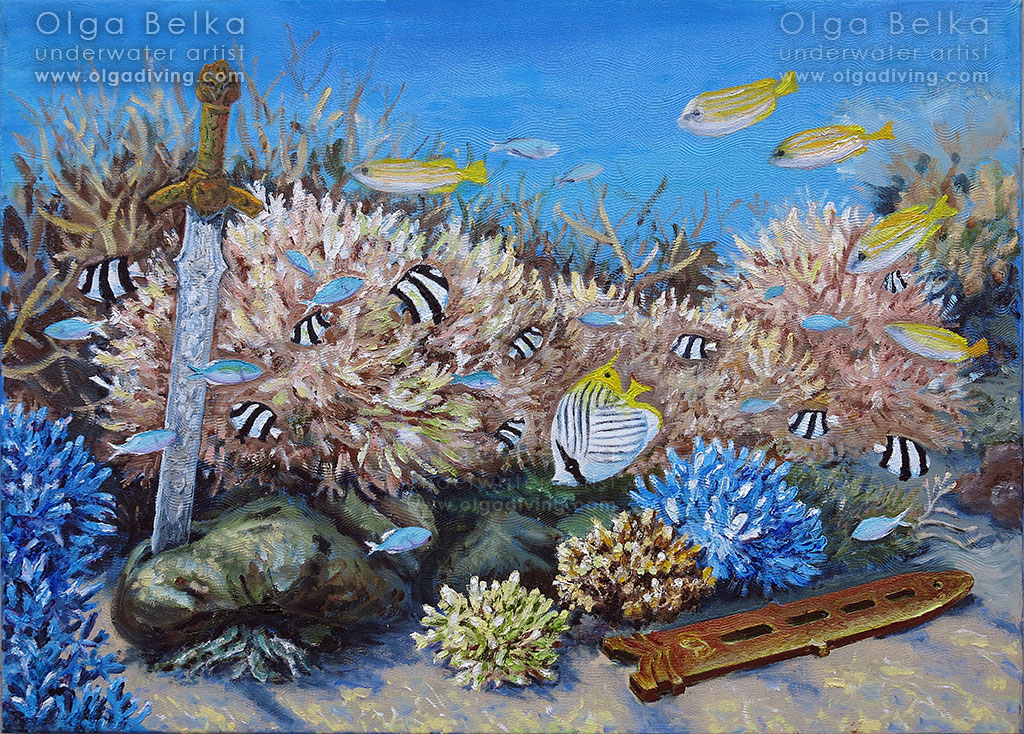 In ancient times in England, there was a huge stone with an ancient sword immured in it. The golden inscription on the sword said that the king would be the one who pulls out this enchanted sword, thus proving his incredible power and the right to the throne. So far, no one has succeeded…

The painting “Sword in the Stone” is not about sunken treasures. This is whimsical portraiture of “what would this legend look like if everyone lived underwater”. I have already used this allegory in the painting “Danae”, where I moved the classic ancient story under the water. I was obsessed with an old English legend about King Arthur. So much ancient power, dramatic tension, love, and cruelty were concentrated in it. And all this is still dormant in the sword and stone, while young Arthur is nonchalantly frolicking and does not suspect his high origin.

The role of the stone is perfectly suited to the greenish hard coral. The same as in other underwater stories, my props are plastic, and sticking them in the coral would be unforgivable. So, it was necessary to fix the sword vertically in the steel part of the hammer and stick this structure in the sandy area between the corals. I worked on the painting for five dives at a depth of four meters. But what dives they were! I was so engrossed in my work that we came out of the water only when my video operator showed me hу was out of air at all. That is, sometimes we sat under the water for three hours. Then usually we had lunch. After that we prepared the equipment and went under the water.

Besides my video operator, butterflyfish, Zebra damselfish, and yellow snappers have served as my assistants and models. For some reason, when working with this painting I had especially many viewers – vacationers at the hotel. Constantly someone was diving on hold of breath and poking me with an action camera. It was taking me somehow out of medieval England and transferring me into the real world.

Despite the solemnity of the plot, the painting turned out to be light and sunny. I deliberately placed the sword and scabbard far from the center in such a way as to shift the focus to the peaceful landscape, framed by elements of a formidable weapon. The sword is sleeping and waiting for its king. The time for great feats has not come yet.