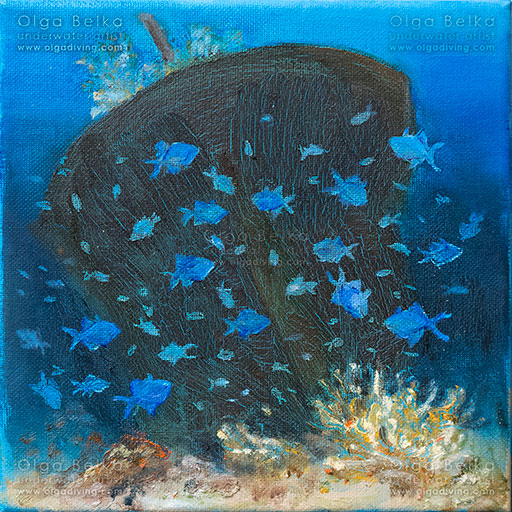 When saying “wreck” divers mean the sunken ship and not just any consequences of accidents. I joined a group of divers going to dive on the wreck. I clarified the depth and was told that the upper deck is located at the depth of twelve meters. Presumably, it lies next to a steep slope where you can sit opposite the ship conveniently. However, as it turned out later, no one on the board of the dive boat was aware that I planned to make a painting.

As a result, I was dropped somewhere over the wreck in the place where visibility was minimal. The slope was far away and covered with coral, there was no way to sit down on it. The only suitable place was under the bow of the ship at the depth of twenty-four meters. I have completed this little sketch in forty minutes, because it was simply impossible to stay underwater any longer, despite the special oxygen-enriched mixture in the tank.

The divers know what I mean. If you are not familiar with diving, just believe me: for the sake of my health, I had to work very quickly. The hull of the ship is being lost in the dark blue, and in front of me is a crowd of blue triggers, almost glowing in the gloom.